How to Grow Turk's Turban Squash or Gourd 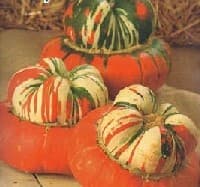 If you’re looking for a confusing plant, Turk’s Turban squash is it. Also called “Turk’s Turban Gourd”, the fruit of this winter squash looks like it came from somewhere in outer space. Secondly, it goes by several names. As a member of the Cucurbita family, Turk’s Turban is related to pumpkins, squash, and gourds. So, it’s no wonder pumpkin growers call it a pumpkin, gourd lovers consider it an ornamental gourd, and squash growers commonly refer to it as winter squash. Therefore, we will leave it to you to decide where this festive vegetable (actually, it is a fruit) should be categorized.

Turk’s Turban is perfect for decorating in fall displays. They look great among pumpkins and gourds. Certainly, its alien appearance makes for a great conversation piece.

Turk’s Turban fruit colors vary and are brightly colored. The bottom half is usually a solid color in shades of dark orange to reddish-orange. The top is generally beige with streaks of reddish-orange and dark green. Fruits grow to about 12 inches in diameter and average about 5 pounds.

You can use Turk’s Turban in any of your favorite squash recipes. It is good roasted, baked, steamed, in soups, or on the grill.  Find Squash recipes

Origin:  Turk’s Turban is an Heirloom. It has been around since at least the 1820s. While it may look like it comes from outer space, tasty Turk’s Turban actually originated on good old planet Earth. It is native to Central and North America.

Don’t Get Confused: Turk’s Turban is also the name of Clerodendrum Indicum, a flowering plant. They are not related

Sow Turk’s Turban seeds in the spring after the soil has warmed up and all danger of frost has passed.

Space plant at least 6 feet apart in all directions.

Garden Tip: Nick Turk’s Turban seeds, then soak them in water for up to 24 hours, before planting.

In areas with a short growing season, start seeds indoors 4 to 6 weeks before the last frost. Use big pots and do not let the plants get root-bound.

Like other Cucurbits, Turk’s Turban plants are heavy feeders. Plant them in rich, loose garden soil. The soil should be well-drained. Provide ample fertilizer regularly. A side dressing of fertilizer and regular feedings of fertilizer will significantly help the health of the plant and the size of the harvest.

Water regularly, especially during dry periods and the fruit growth stage. Water deeply. Like other garden vegetables, keep the soil moist, not wet. Irregular watering can result in pre-mature ripening of the fruit.

Weed regularly, especially during the early growth stage. Adding a layer of mulch or compost, will keep the weeds down, and feed the plant.

Train vines to go in the direction you want them to go. Carefully, and slowly, turn vines as needed. Move them a little each day. Trim vines, removing tertiary vines to promote larger fruit growth.

A wide variety of insects can infest the plants during the growing season. It is important to have an insect control plan in place before insects invade your garden.

The most common insect pests include:

A variety of other pests can also cause problems, depending upon where you live. Apply insecticides as needed, following the directions on the label.

Deer and rabbits can also be a problem. We recommend fencing to keep them out.

As a member of the Cucurbita family, most squash are susceptible variety of bacteria and fungus diseases. Among the most common, are powdery mildew and bacterial wilt.

Plant disease problems are most common in hot and humid weather. A strong, healthy plant, and fungicide treatment will help avoid these problems. Don’t wait for plant disease to get a foothold on your plants. Treat with fungicides at the first sign of problems.

Allow the fruit to ripen, and the shell to harden, prior to harvesting. However, harvest them before frost.

Turk’s Turban plants are not hardy. The plants are susceptible to frost in the spring and fall.

If frost or near frost temperatures are expected, cover up the plants.

You can substitute Turk’s Turban squash in any squash recipe.

Varieties of Squash – there are many varieties to grow

How to Grow Squash by Garden Hobbies