Poinsettia Plants - How to Grow, Care and Force Plants 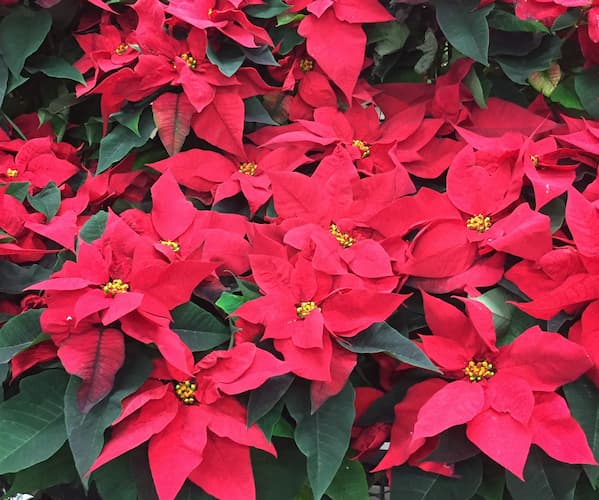 About Poinsettia Flowers and Plants

Originally from Mexico and Central America, Poinsettia plants are by far the most popular flower plants during Christmas. They are the largest flowering plant crop in the U.S. with sales of over 63 million pots!  The plants don’t naturally bloom in December. Rather, in early, Fall, nurseries begin forcing Poinsettias to bloom. The process takes several weeks. And, if you have a plant in the house from last year, you can force it to bloom. To find out how just read on….

Native to the warmer southwestern U.S. climates and Mexico, Poinsettias are susceptible to cold and frost. So, when you bring them home in cold weather, make sure to bring them right home. Don’t leave them in your car and go back to your Christmas shopping.

There are over 100 varieties of this plant. These perennial plants are shrubs that can grow 10-15 feet in the wild. Poinsettia blooms are not actually flowers. Rather, they are leaves called “Poinsettia Bracts”. The traditional red poinsettias plants are by far the most popular. There are several other Poinsettia Bract colors including pink, white, salmon, yellow, and multi-colored bracts

Poinsettia flowers are named after Joel Roberts Poinsett, the first Ambassador to Mexico who brought the plant back to his plantation in the U.S. He was also a botanist and a physician. Poinsett grew the plants in his Greenville, S.C plantation and gave them out as gifts to friends.

Did you Know? Poinsettia Day is December 12th. It was declared in honor of Joel Roberts Poinsett who died on December 12, 1851.

Poinsettias are not poisonous as many believe. But, eating them could give you a stomachache.

Other Names: Poinsettias are also called “Christmas Plant”, “Lobster Flower” and Flame-Leaf Flower”. In Chile and Peru, they are called “Crown of the Andes”. 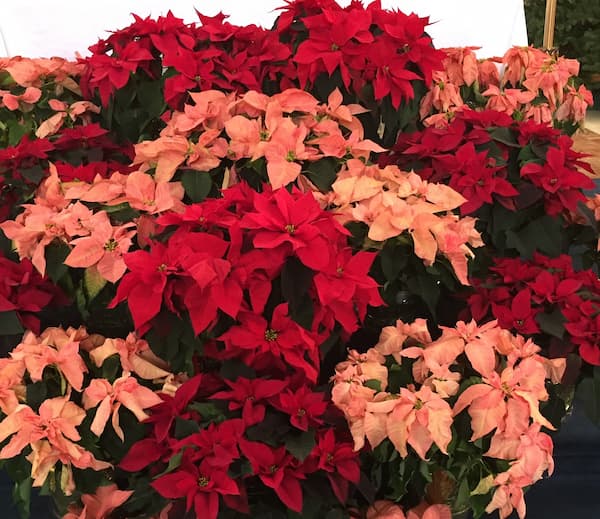 Look for lots of dark green leaves and bright colored flowers, called Bracts. If either the leaves or the flowers are dry or brown around the edges, select another plant. Look for completely open flowers. Poinsettia blooms are slow to open, but once they bloom, the flowers will remain full and attractive for several weeks.

If the weather is cold, make sure to wrap up the plant well for the trip from the store to the car. Even short exposure to cold and wind can damage your new Poinsettia plant before it is even home.

Poinsettia plants are propagated by seeds. However, the seeds are difficult to find. Plants sold on the market are forced to bloom for sale during the Christmas season.

Poinsettias are easy to keep. They will retain their blooms long after you have put away the Christmas decorations. If you are lucky, they will last until Valentine’s Day. After bringing them home, keep them in a sunny room. The ideal temperature range is 60 – 70 degrees. They do not like drafts. And, they do not like being placed near high heat like a furnace vent or fireplace.

For growing poinsettia plants during the summer, you can move your plant outdoors to a sunny location. Plant it directly into your garden or a container. Give it a good trimming, into a nice rounded shape. Apply general-purpose fertilizer every two to three weeks.

Bring the plant indoors before the first frost. Poinsettias cannot withstand frost. Check carefully to be sure you did not bring in any “critters” with your plant.

Did you know? Poinsettias can grow up to 10 feet. But, to grow them this big you will need a few years in a tropical climate that does not experience frosts.

The poinsettia plant above was forced at home, following the instructions below. Because we did not have a grow light on it during the daylight hours, the leaves were not as full and lush as a store-bought plant. But, as you can see, it certainly came out beautifully!

Forcing Poinsettias to bloom is not the easiest task. But, when you succeed, it is rewarding. if you have kept them around and healthy all year, you’ve just gotta give it a try.

The concept is simple enough. Any time from late September to October first, you need to put the plant in total darkness for 12-14 hours a day. Here is where it’s tricky. Any small light can upset the process. During the day, it should get six hours or more of sunlight. Continue this process daily until early November, then bring it out into the room. Now with a little luck (some will say a lot of luck) and your personal green thumb, it will be in full bloom during the Christmas holiday.

Tip: A black plastic bag works well. Place the plant in the bag and use a twist tie. Each morning, remove the twist tie and carefully lower the bag to the floor.

The Holiday Side of Poinsettias

How to Grow Just about any Flower